More than 500 union leaders, campaigners and organisers subscribe to my email newsletter. 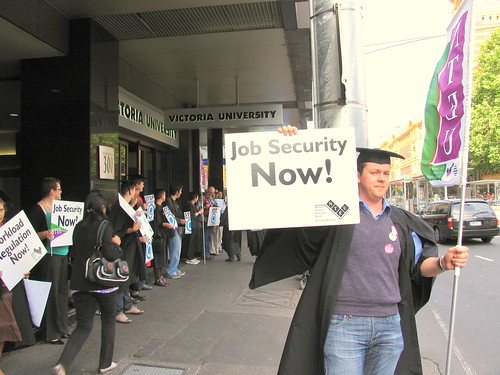 For all you inspired unionists out there, I strongly encourage you to enter the LabourStart Photo Competition.

It’s a great initiative, and there are already some really good photos that have been submitted.

This year I entered the photo you see here.

It’s a picture I took in December 2008 of a protest out the front of the Victoria University Council meeting in the Melbourne CBD, following the University’s announcement that it sacking hundreds of jobs.

Needless to say, there was an enormous outcry and public campaign to stop the job cuts – the largest ever in Australian university history. The job cuts were stopped, thanks to threats of industrial action by staff, and the community campaign that was run in support of staff and students at VU.

Join over 580 union leaders and campaigners who subscribe to my fortnightly(ish) newsletter.