While there’s a million and one articles on the internet about how Obama built his success on social networks.

There are fewer articles about how local candidates’ campaigns used social networking to promote their candidacy. I’ve previously written about one instance of a local campaign – the governor race in Virginia – using text message campaigning in an innovative way. However, even that case is an instance of a well resourced campaign of near-national significance (one step below a presidential race).

Over at Mashable, one of the essential resources for new media and social networking, there’s some great examples of how politicians in the US are using tools like Facebook and Twitter to engage with voters and constituents.

Just like in the corporate world, social media has created a two-way conversation between politician and electorate. One of the biggest adopters on the state level has been Massachusetts (D) Governor Deval Patrick. Brad Blake is the Governorâ€™s Director of New Media and Online Strategy, and holds the reins when it comes to any news/social media efforts coming out of the Governorâ€™s office.

So when thereâ€™s an update to the Governorâ€™s Twitter feed, YouTube channel, Flickr stream, a new blog post, an update to the web site, or even a media package that goes out with a major press release, heâ€™s involved. He said that heâ€™s â€œconstantly learning and listening to our users and those in both government and web 2.0 to tweak what we do and do it better.â€

Here in Australia, there’s some examples of politicians using Twitter and Facebook to break out of the traditional news and media cycle, to speak directly to the public. 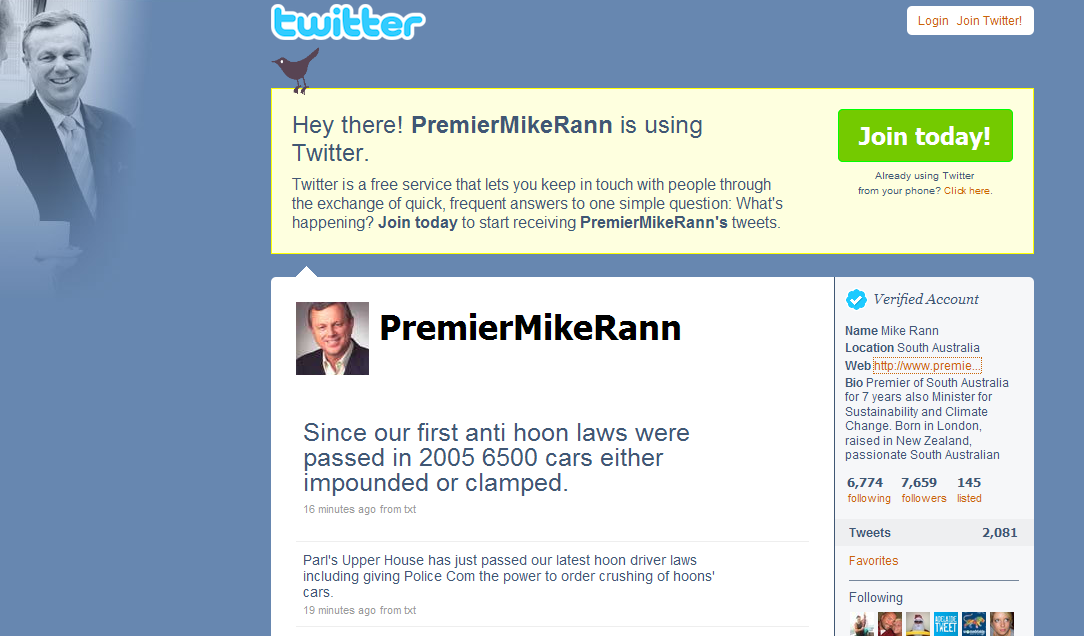 Mike Rann is up there with one of the most accomplished users of Twitter of any Australian politician.

Rann uses Twitter to announce policy, to engage in attacks (and defence) against the Opposition, and also occasionally responds to questions.

I’m told Rann became a fan of Twitter after meeting up with Lance Armstrong during the Tour Downunder. As you can see, Rann has quite a strong Twitter following. He also has a customised Twitter background, which is a must for any politician. Rann also links his Twitter account to the official Premier’s website.

What makes Rann’s Twitter different from other premiers’ – like Brumby – is the personal touch. He doesn’t just use it to link to press releases. You get the feeling that Rann is really tweeting from his Blackberry. (Rann’s twitter updates are all via text message, suggesting that they are – mostly – written by him.)

Rann also updates his Twitter almost every day, keeping a steady flow of tweets for his followers. 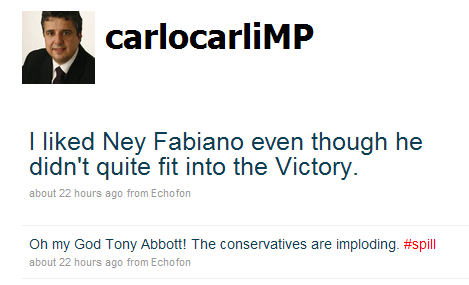 At a local level, MPs can use Twitter to break through to constituents, rather than relying on traditional media. Carlo Carli for example is the Labor MP for Brunswick. In addition to a Facebook page and a blog, Carlo keeps his Twitter account regularly updated. Updates range from submissions to local reviews, to his views on political issues or European football.

Reading Carlo’s updates shows that he cares deeply about his local community, climate change and social justice. You can also see that he’s using Ecofon, demonstrating that the updates are likely written (mostly) by him.

There’s lots more examples. Local MPs can give live updates on their attendance at local community events, as well as twitpic or twitvid their activities. They can also give updates on legislation as it passes through parliament, or interesting

The Greens Party in Victoria for example are all on Twitter, and have their own websites, as well as a central Greens MP blog. The Liberals are also increasingly getting onto Twitter, especially the senior ones with leadership ambitions (e.g. Hockey, Abbott, Alex Hawke).

While most non-Minister (or shadow ministers, or leaders) have relatively few followers, I’m certain this will change once we hit election season. It remains to be seen if MPs integrate their online activities with their hard-copy campaign material. For example, letterboxing leaflets with Twitter and Facebook links, as well as website addresses. I’d also like to see more MPs websites include Twitter feeds and “Become a Friend” Facebook connect links.

Getting back to that Mashable article I mentioned at the start of this post: at the end of the article it shows a screen grab of the “real time results” for a Twitter search.

This is one of the most useful tools for MPs, who can use the “live” web to try to put their finger on the pulse of their local community. Using Twitter (and Facebook and other) search tools to local chatter about a local development, scandal or landmark can help politicians engage directly with the concerns of their constituents.

(NB, politicians beware: organised groups can manipulate this kind of thing, as we saw with the anti-CRPS campaign run during the leadership chaos of the Liberal Party.)

What about you? Do you know of any other good examples of local politicians (especially local council) using social networking?

Alex works with the ACTU. This is his personal blog.